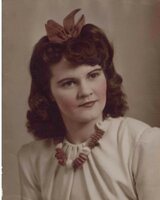 Mary J. Petrokonis, 100, of Nanticoke, passed away Saturday, February 5th at Birchwood Healthcare and Rehabilitation Center, Nanticoke. Born July 8, 1921 in Nanticoke, she was a daughter of the late William and Cordelia Trevett Goodman. She attended the public schools, graduating from Nanticoke High School, class of 1939. She was married to Joseph J. Petrokonis for fifty years until his passing on December 11, 1994. Early in life Mary was employed at the J.J. Newberry Department Store and the Duplan Silk Mill. In 1955, she and Joseph moved to Bloomfield, New Jersey where she was employed as an order processor for Deluxe Check Printers in Caldwell for nine-teen years. They returned to live in Nanticoke in 1978 and Mary worked part-time at Luzerne County Community College as a switchboard operator until retiring in 1983. She was a faithful member of First English Baptist Church and its E.F.T.O. (Each For The Other) class. She will be deeply missed by her son, Joel Petrokonis, Nanticoke; nieces and nephews, William Goodman and Barbara Lukowski, Janet Marko and husband, Andrew and Franklin Thimm and wife, Diane, their daughters, Natalie and Terri Thimm as well as several other great nieces and nephews; and dear cousins, Linda and Chuck Wright and Carol and Kenneth Gilson. In addition to her husband, Joseph, she was preceded in death by a sister, Alta Thimm and a brother, William Goodman Jr., also by her cousin, Margaret (Peg) Davis, who was as close as a sister. A private funeral service will be held from Davis-Dinelli Funeral Home, 170 E. Broad Street, Nanticoke, with the Rev. Kenneth Turley, her pastor, officiating. Interment will be in Hanover Green Cemetery. There will be no public viewing or calling hours.