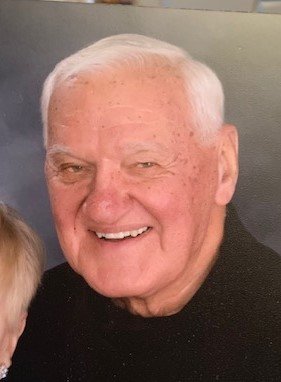 Please share a memory of Dr. Peter to include in a keepsake book for family and friends.
View Tribute Book
Dr. Peter P. Ravin, DDS, 91, a resident of Mercy Center, Dallas and formerly of Hunlock Creek and Tilbury Terrace, Plymouth Township, passed away Friday, September 25, 2020 at Mercy Center where he had resided for the past three years. Born in Glen Lyon, he was a son of the late Peter Paul and Elizabeth Gronka Ravin. He graduated from Newport Township High School in 1946 and continued his education on a football scholarship to the University of Georgia and later Temple University School of Dentistry from 1949 until 1953. In 1954 Dr. Ravin was commissioned and served with the U.S. Navy as a Dental Officer aboard the USS Rockbridge, and later was a reservist until his honorable discharge in1964. He finished his education graduating from University of Pennsylvania Medical School in 1959. He married Jinny Scrimgeour Aagaard on April 6, 1973. Dr. Ravin enjoyed a long career practicing dentistry in Shickshinny as well as an oral surgery practice in Wilkes-Barre. He retired in 1997. He was a member of the Wyoming Valley Country Club, serving as President in 1984; the YMCA Century Club; and the Luzerne County Dental Society where he had served as President. He enjoyed deer hunting at Anticosti Island, Quebec and traveling, including trips to Kenya, Aspen and the Galapagos Islands. Pete spent time picking strawberries, blueberries and following the school bus to attend the sporting events of his grandchildren. He also delivered meals for Meals On Wheels Wyoming Valley. He was preceded in death by his brothers, Dr. Louis Ravin, Dr. John Ravin and Dr. Joseph Ravin and a niece, Judy Wysocki. Surviving are his wife, Jinny; stepdaughters, Dr. Janet Joseph (Richard Joseph) and Ms. Susan Whitesell (Douglas Whitesell); grandchildren, Sean and Richelle Joseph and Jamison and Rachel Whitesell as well as several nieces and nephews. A blessing service will be held Saturday, October 31st at 11 a.m. from Davis-Dinelli Funeral Home, 170 E. Broad Street Nanticoke with the Rev. James R. Nash, officiating. Interment will follow in St. Michael’s Cemetery, Glen Lyon. Friends may call for visitation Saturday, October 31st from 10 a.m. until the time of the service at Davis-Dinelli Funeral Home. The family would like to thank the Mercy Center for the wonderful care that he received. In lieu of flowers, donations can be made to Meals On Wheels Wyoming Valley at 190 S. Sprague Avenue, Kingston PA 18704.
Saturday
31
October

Family will receive friends for Visitation

Share Your Memory of
Dr. Peter
Upload Your Memory View All Memories
Be the first to upload a memory!
Share A Memory
Send Flowers
Plant a Tree