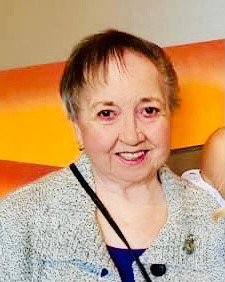 Please share a memory of Stella to include in a keepsake book for family and friends.
View Tribute Book
Stella (Monti) King August 6, 1926-December 16, 2020 Stella for Star. Stella (Monti) King of Nanticoke, Born in Brooklyn NY to Sicilian parents Vicenzo and Juanina (Perrone) on August 6,1926. The middle child. Her Mom died when she was 12 and changed her forever. She was the last survivor of her siblings: Josephine, Virginia, Salvatore and Teresa. She met her husband to be Fred King on a blind date arranged by her best friend Mary. He had been sent by his aunt to NY to work, to avoid working in the coal mines. He was handsome and it was love at first sight. They went to a burlesque show and Fred turned red throughout the show which endeared him to Stella. Plus it didn’t hurt that she thought he looked like Clark Gable. They walked on the beach in Coney Island planning their lives. They were engaged before he went off to Korea. When he came back, they were married. They had a daughter Carol and then a son Fred Jr., many years later Lori (Piech) was born and they were a family of five. Carol moved to California to get her Master’s at USC and work as an actor. Changed her name to Carlyle, got married to Webster and they had the granddaughter Marjorie. Lori married Mike and brought along her daughter Brianne who was the first granddaughter. Fred married and had 3 girls, Clarissa, Amanda and Frederique. It wasn't until Amanda had Greyson last year that a boy was brought into the family. And now Gram became a Great Gram. Stella's life was full and complete in PA. Brooklyn girl, a fish out of water. She could sew anything and made the most wonderful food. She volunteered at Mill Memorial Library and was very active with their fundraising and children's library. She was an avid reader, a lover of theatre and opera. Could make you laugh like no one else. Even though her husband Fred preceded her over 23 years ago, he was always a part of their lives and memories. She joined the gym after Fred died and for 20 years, she went 3 times a week and met a whole new group of friends, they called themselves “the Mermaids”. The Coney Island fish became a Mermaid but she will always be the “Star”. Stella for Star. Private services will be held by the family at a later date. All she asked was that you hold your loved ones close.

Private Services for Stella will be held at a later date