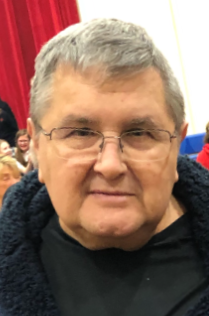 Please share a memory of Joseph to include in a keepsake book for family and friends.
View Tribute Book
Joseph Paul Golembeski,75, of Nanticoke passed away peacefully early Monday morning, August 1, 2022 at Wilkes-Barre General Hospital. A life-long resident of Nanticoke, he was born July 17, 1947 a son of the late Joseph and Ann (Dickie) Golembeski. Following graduation from Nanticoke High School in 1966, he entered the U.S. Army, serving in Germany and Amsterdam during the Vietnam War. He was honorably discharged September 5, 1968, attaining the rank of Specialist 4th class. Following his military service, he continued his education at Wilkes-Barre Area Vocational-Technical school, training in upholstery and operated J.G. Upholstery for many years. In 1987 he began employment at State Correctional Institution, Dallas, where he was a Corrections Officer for twenty-four years, retiring in 2011. Joseph was a member of St. Faustina Kowalska Parish. In earlier years, he was active in baseball, coaching Little League and Teener League. He was an avid outdoorsman, enjoying fishing, hunting, shooting, and camping. He also loved his green1974 Chevy van. In addition to his parents, he was preceded in death by his first wife, Deborah Piniazek Golembeski on February 2, 1975. Surviving is his wife of forty-four years, the former Catherine Acquisto; a son, Joseph Golembeski and wife, Brenda of Nanticoke, a daughter, Kimberly Sambo and husband, John of Swoyersville; grandsons, Zackery Golembeski, and Dominic and Joshua Sambo; and a brother, Eugene Golembeski and wife, Susan of Nanticoke. A Blessing Service will be held 11 a.m. Thursday from Dinelli Family Funeral Home, Inc., 170 East Broad Street, Nanticoke with Deacon Florian Gyza, of St. Faustina Kowalska Parish, officiating. Interment with military honors will follow in Holy Trinity Cemetery, Sheatown. Viewing and visitation hours will be Thursday from 9 to 11 a.m. at the funeral home.
Thursday
4
August

Interment with Rite of Committal and Military Honors

Share Your Memory of
Joseph
Upload Your Memory View All Memories
Be the first to upload a memory!
Share A Memory
Send Flowers
Plant a Tree